Shootpool teamed up with Champions Poker League in September 2010 to start hosting poker tournaments every Tuesday.

As Tuesday's grew with more players over two years, Sunday tournaments were added in October 2012 and in November 2013, tournaments begun on Saturday's.

As of the end of September 2015, more than 500 tournaments have been played across 21 league seasons for the three days. 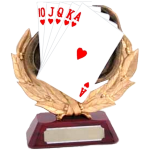 There are no committee details available for this association.