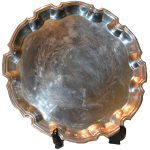 The Plate Cup has run in the Aylesbury Invitation Pool League for at least the last 13 seasons, but is believed to have run for longer, back into the 1990's, but no records can currently be found to confirm this.

This competition features teams that lose in the first round (and some seasons the second round also) of the Knock Out Cup and therefore usually has a small field of teams participating in any season.

Review of QF stage of the AIPL Knockout Cup and the AIPL Plate Cup.

Review of AIPL Knock Out Cup Preliminary Round.

Review of the QF stage of the AIPL Plate Cup.

Cup / Plate / Doubles Round -Up, Singles Up Next

Round-Up of all competitions being played around the Xmas break.

Shootpool Sharks fight back from 4-2 down to progress into the Plate Cup Semi-Finals.

Review of Plate Cup R1, and the draw for QFs.

Shoot Vetz beat Aeglesburgh 5-2, and New Zealand A beat Shoot 8-Ball 5-3, and a preview of the Final.

All-Aristocrat final in the Plate

With the matches that were played, there was a chance of either an all-premier final, an all-division one final, or an all-venue final. But it was two teams from Aristocrat that came through the two semi finals.

In-depth preview of the two semi-finals being played this week in the AIPL Plate Cup.

There are currently no matches scheduled. Please keep checking the news for details of the draw.