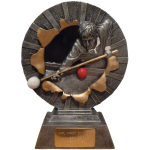 The AIPL 2011/12 season is in the boos and last weekend the league dished out the awards at its annual ceremony, this year held at Shootpool.

Pool team is a Brit of all right

Britannia 'A' cemented their place at the top of the Premier Division with a convincing 9-0 win over Rothschild Arms to stretch their league advantage to nine points.

There was plenty of action in the latest round of the towns pool leagues. In the Premier League Britannia 'A' moved five points clear at the top with a 9-0 win and in Division 1, table toppers Shootpool Shooters won 5-4.

Millwrights duff up the Bucks Yeoman

In the Premier Division, Millwrights 'A' got off to a phenomenal start in their match against Yeoman Duffers and in Division 1, Ex-Services New Maid finally gained their first win of the season.

Victorious Vic shoot down the Shootpool

Larry Baker and James Chilton led The Vic to victory, as did a touch of seven-ball magic from Frank Almeida for the Britannia 'A'.

In the AIPL Premier Division last night, the top two both had commanding victories as Britannia 'A' and Shoot Vetz both won 8-1.