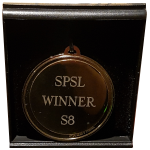 David Gee sealed the runners-up spot in Asti and earn promotion with a 6-3 win on the final day of the season.

Max Burgess wins his final match of the season in Asti to finish unbeaten as the Season 8 champion.

David Gee defeated promotion rival Chris Grigson 7-2 to move up four places into the fourth in Asti and just 13 points off second with two matches in hand.

5-4 on the night, bigger margins in the catch-ups

The two played scheduled matches this week in Asti both finished 5-4 but there were bigger winning margins in the re-arranged or catch-up matches played this month.

Review of the week 8 matches in Asti.

Chris Grigson beats James Wood 5-4 in a clash between two promotion rivals in Asti as leader Max Burgess extends the gap between 1st and 2nd to 20 points at the halfway stage.

Max Burgess extends his lead at the top of Asti after he won 8-1 and his closest promotion rivals suffered defeat.

Jordan Maxwell Hoff moves up into third place to join teammates Max Burgess and James Wood in the top three in Asti after week five.

Max Burgess wins both his matches as he returns the top of Asti.

May goes top on night of mixed fortunes

Ryan May both won and lost 7-2 as he moved to the top of Asti.

Burgess and Carter level on top of Asti

Max Burgess and Amber Carter are level at the top of Asti after two weeks of the new season with Jordan Maxwell Hoff just behind in third place with all three unbeaten.